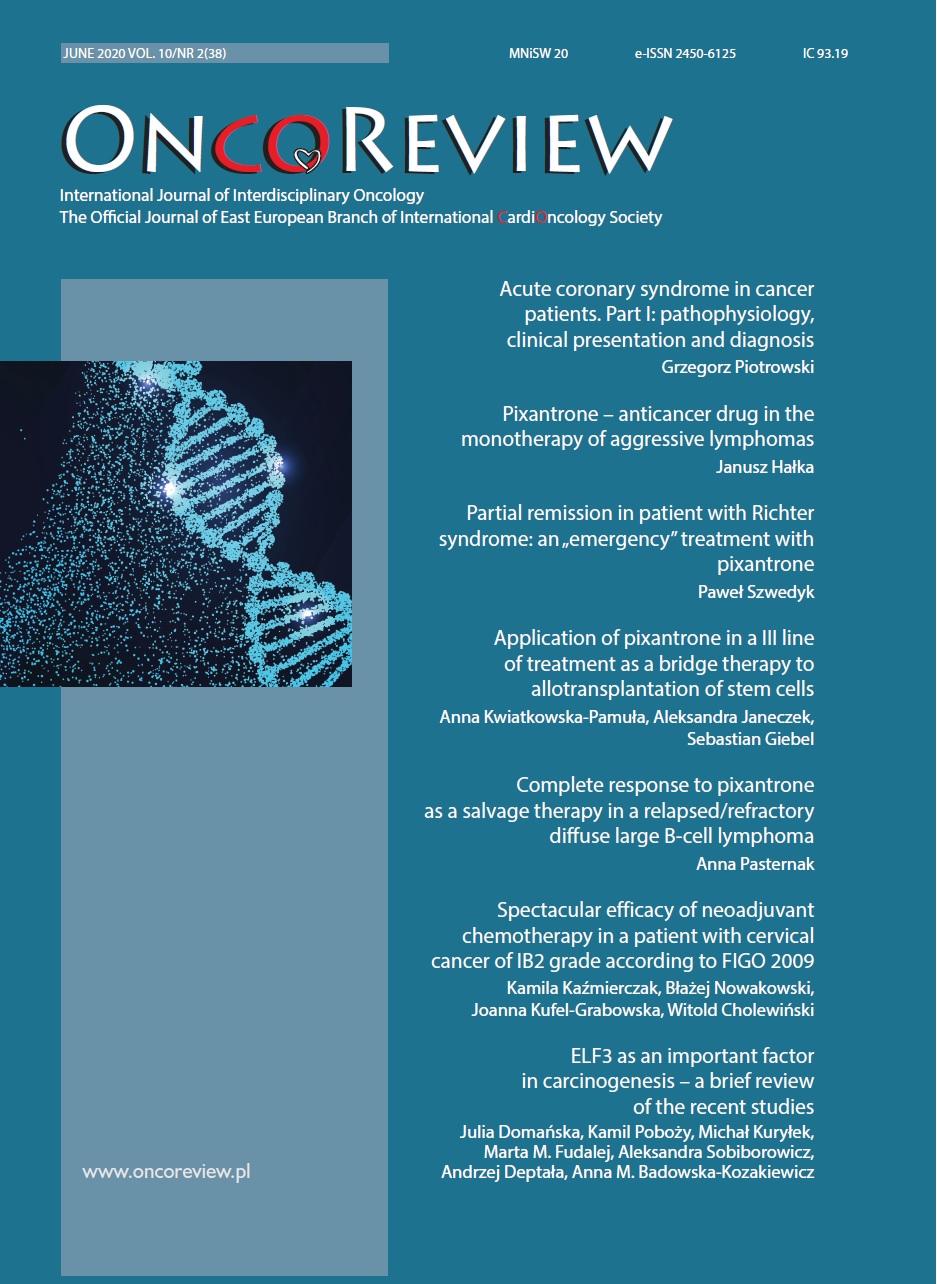 Anna Pasternak
Clinical Department of Hematology, Warmian-Masurian Cancer Center of the Ministry of the Interior and Administration’s Hospital, Olsztyn, Poland

Diffuse large B-cell lymphoma (DLBCL) is an aggressive form of non-Hodgkin lymphoma (NHL). It is one of the most common form of the disease. A combination of chemotherapy with anthracycline and a monoclonal antibody targeting CD20 is used as a I line therapy. About two out of three people with DLBCL achieve and maintain complete remission after this treatment. In case of relapse or refractory disease a salvage high-dose chemotherapy followed by autologous stem cell transplantation (HD-ASCT) is the standard of care. Patientrs who relapse after HD-ASCT have a very poor prognosis. Pixantrone is a new anthracycline derivative registered to treat relapsed/refractory DLBCL in adult patients. It is a cytostatic agent with a reduced cardiotoxicity comparing to classic anthracyclines. Herein, we report two cases of relapsed/refractory DLBCL treated with pixantrone as a salvage therapy. The first case concernes a 58-year-old female patient with a diagnose of DLBCL, who relapsed after four prior lines of therapy (R-CHOP, ICE, HD-Mtx, CSN radiation) and achieved complete remission after pixantrone therapy, but died of acute myeloid leukemia 3 months after the end of treatment. Second case is a story of a 75-year-old female patient treated with two prior lines of treatment (R-CHOP, R-IVE), who achieved complete remission after a III line of therapy with pixantrone. Pixantrone monotherapy proves to be effective in relapsed/refractory DLBCL. This treatment is well tolerated in a group of elderly patients and can be also used in a group of patients with a limited cardiac function.

Copyright: © Medical Education sp. z o.o. This is an Open Access article distributed under the terms of the Attribution-NonCommercial 4.0 International (CC BY-NC 4.0). License (https://creativecommons.org/licenses/by-nc/4.0/), allowing third parties to copy and redistribute the material in any medium or format and to remix, transform, and build upon the material, provided the original work is properly cited and states its license.

Most read articles by the same author(s)

Obs.: This plugin requires at least one statistics/report plugin to be enabled. If your statistics plugins provide more than one metric then please also select a main metric on the admin's site settings page and/or on the journal manager's settings pages.
Make a Submission
Language