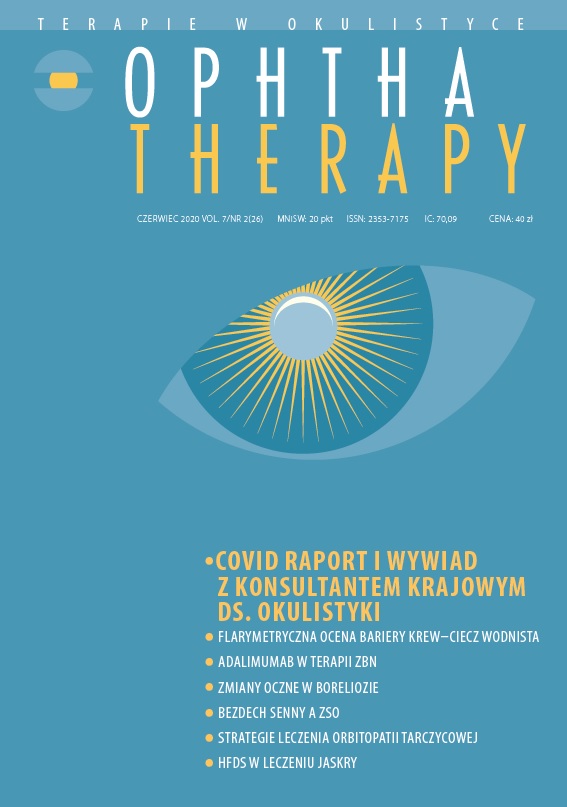 Borreliosis is a disease that was discovered in the 1970s, but its pathophysiological mechanisms and clinical course are not yet fully understood. The number of diagnosed Lyme disease cases in Poland has been increasing over the last decade. Poland has seen endemic Lyme disease, with one of the highest rates of infection in Europe. It is a zoonotic, vector-related disease that is transmitted by ticks that are infected with Borrelia burgdorferi spirochetes. One of the least known, poorly documented, and rarely recognized forms of Lyme disease is ocular borreliosis. Ocular alterations can occur in both the anterior and posterior segments of the eye, depending on the phase of the disease. In early stages when the tick bite is close to the eyeball, erythema-containing spirochetes can spread to the eyelids and conjunctiva of the eye per continuum. In the second phase when spirochetes spread throughout the whole body but have a predilection for nerve tissue, they occupy cranial nerves. This may also affect the optic nerve, less often oculomotor nerves and the retina. This phase of ocular borreliosis is associated with neuroborreliosis. In this stage, ocular borreliosis usually coexists with meningitis or encephalitis.

In addition to the history and clinical picture of Lyme disease, accurate diagnoses based on commercially available serological tests are fundamentally important in Poland. This article describes three phases of Lyme disease. We explain the reasons for its clinical differences in the old and new worlds from an epidemiological perspective. The clinical picture, treatment, and prognosis of Lyme disease are discussed.

Copyright: © Medical Education sp. z o.o. License allowing third parties to copy and redistribute the material in any medium or format and to remix, transform, and build upon the material, provided the original work is properly cited and states its license.

Most read articles by the same author(s)

Obs.: This plugin requires at least one statistics/report plugin to be enabled. If your statistics plugins provide more than one metric then please also select a main metric on the admin's site settings page and/or on the journal manager's settings pages.
Make a Submission
Language